A demonstration of parallel processing performance of this CNGI prototype against the current released version of CASA using a selection of ALMA datasets representing different computationally demanding configurations and a subset of the VLA CHILES Survey data.

Measurement of runtime performance for the component typically dominating compute cost for existing and future workflows – the major cycle – was made against the reference implementation of CASA 6.2. Relevant calls of the CASA task tclean were isolated for direct comparison with the latest version of the cngi-prototype implementation of the mosaic and standard gridders.

The steps of the workflow used to prepare data for testing were:

This allowed for generation of image data from visibilities for comparison. Tests were run in two different environments: 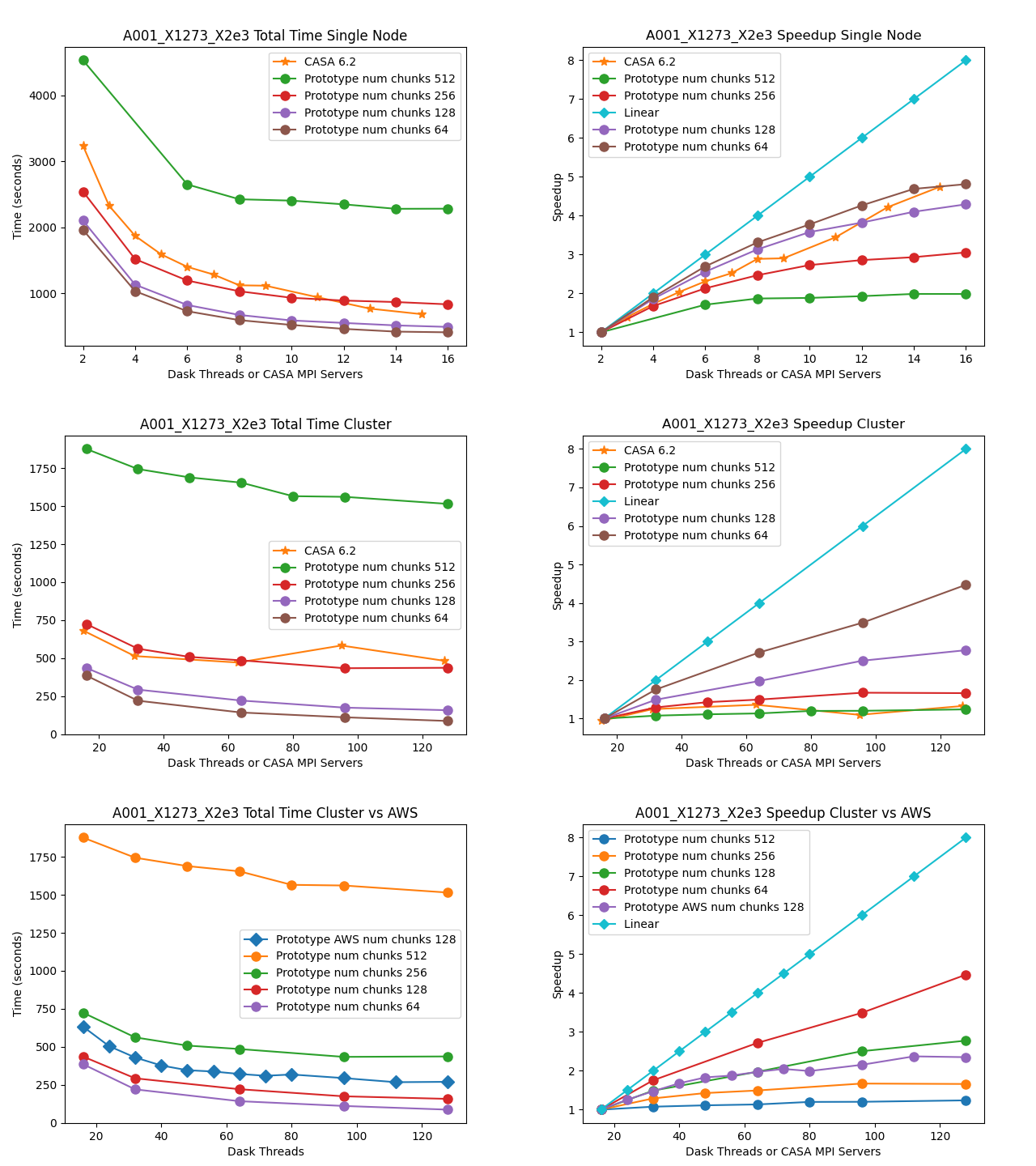 Compact array observations with many (141) pointings using the mosaic gridder. 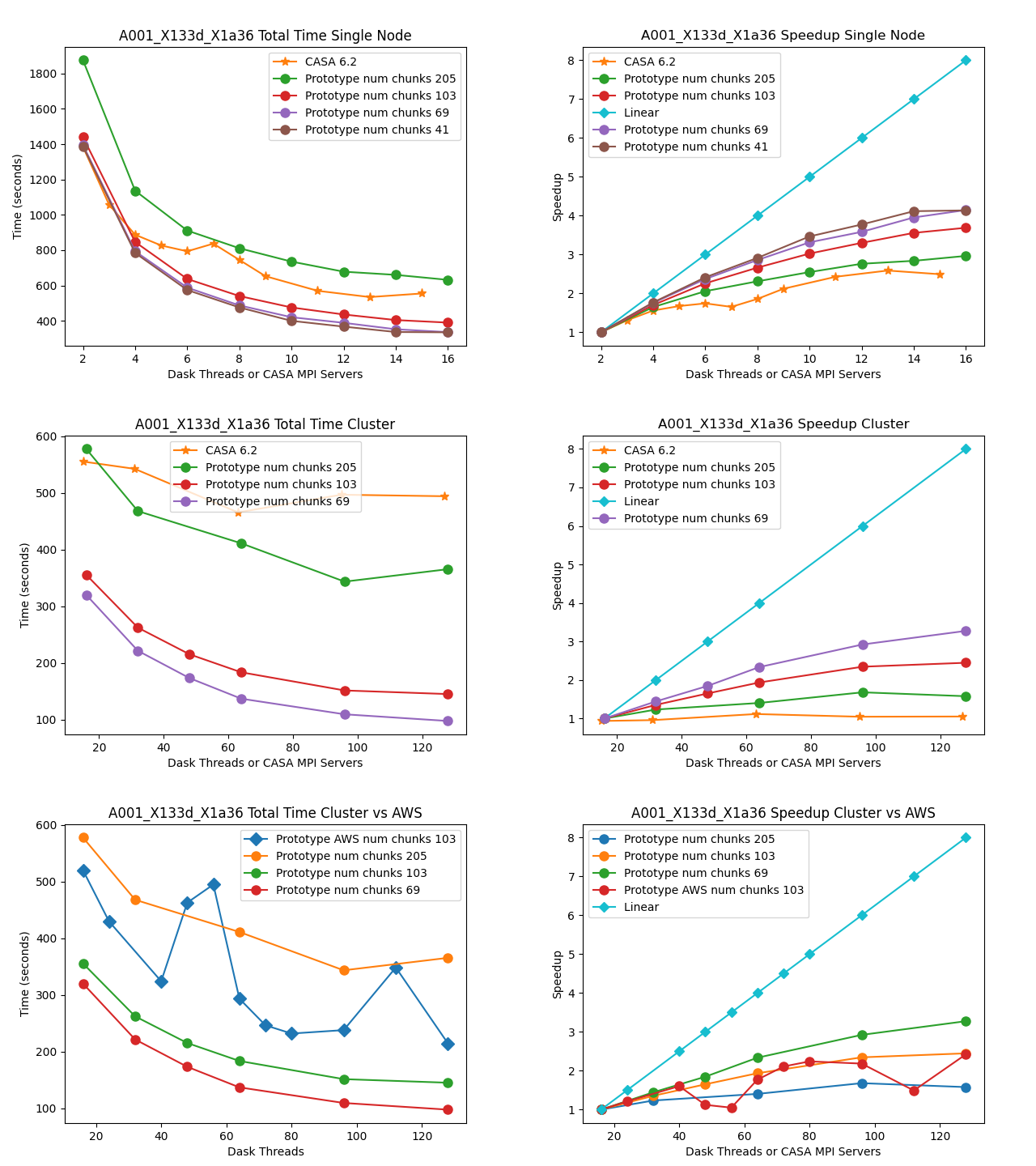 Main array observations with many spectral channels and visibilities using the standard gridder. 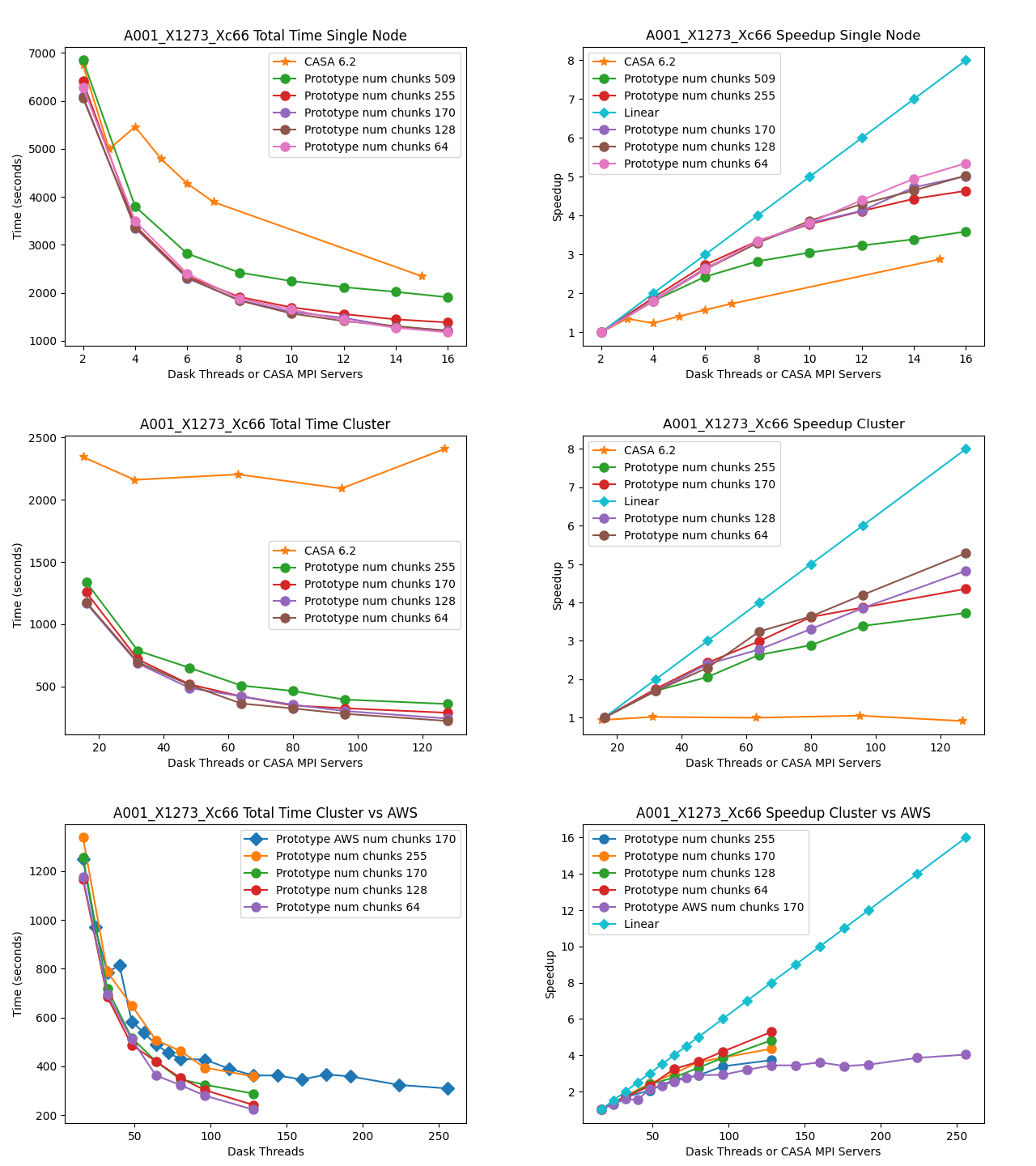 Main array observations with many spectral channels and visibilities using the mosaic gridder. 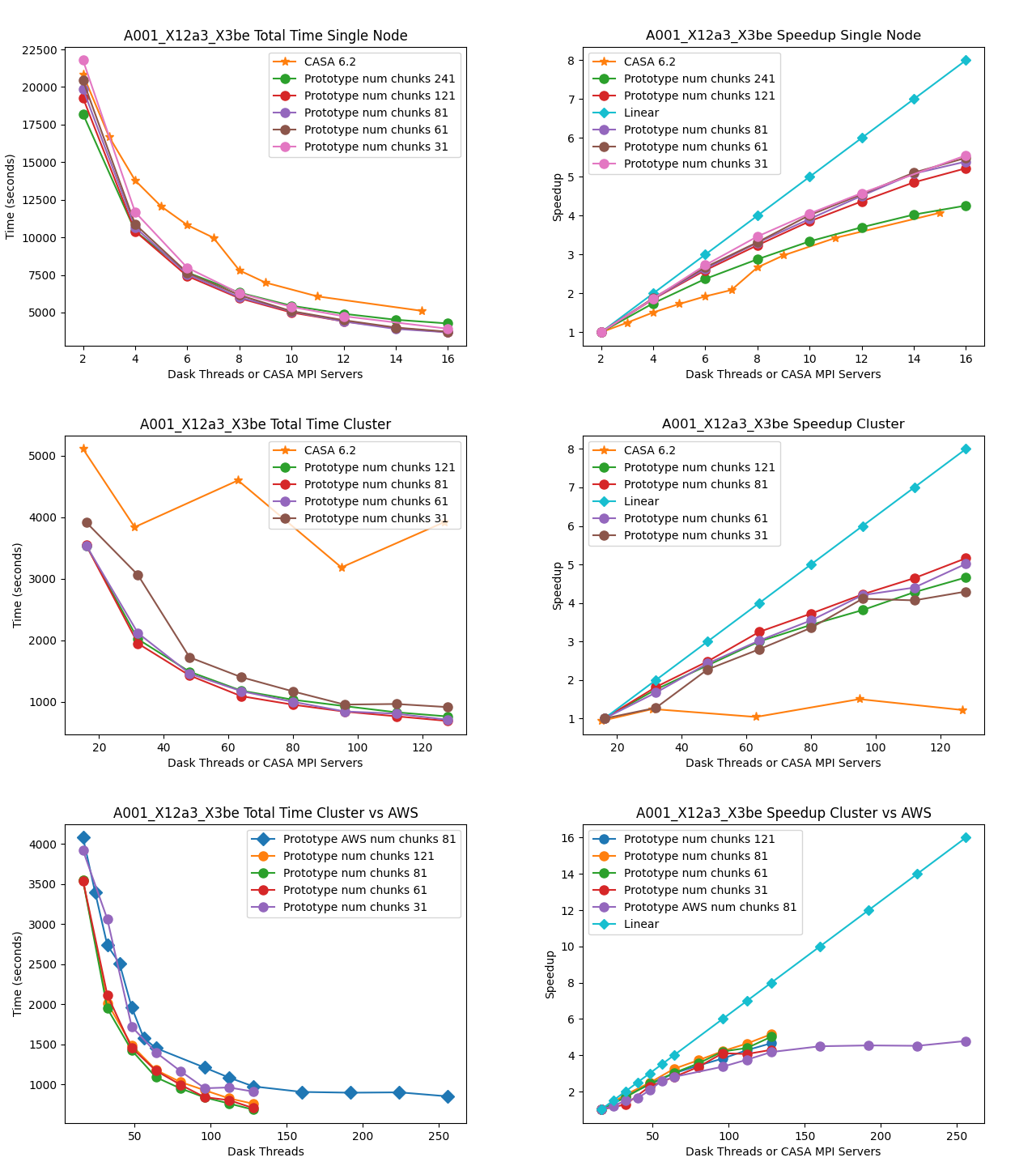 The total runtime of the prototype has comparable performance to the CASA 6.2 reference implementations for all datasets. There does not appear to be a performance penalty associated with adopting a pure Python framework compared to the compiled C++/Fortran reference implementation. This is likely due largely to the prototype’s reliance on the numba Just-In-Time (JIT) transpiler, and the C foreign function interface relied on by third-party framework packages including numpy and scipy.

The Fortran gridding code in CASA is slightly more efficient than the JIT-decorated Python code in the prototype. However, the test implementation more efficiently handles chunked data and does not have intermediate steps where data is written to disk, whereas CASA generates TempLattice files to store intermediate files.

The total runtime of the prototype mosaic and standard gridders was less than the 6.2 reference implementations except for a couple of suboptimal chunking sizes. For the two larger datasets 2017.1.00717.S and 2017.1.00983.S, a significant speedup of up to six times and ten times, respectively, were achieved. Furthermore, the performance of CASA 6.2 stagnates after a single node because the CASACORE table system can not write the output images to disk in parallel.

The chunking of the data determines the number of nodes in Dask graph. As the number of chunks increases, so does scheduler overhead. However, there might not be enough work to occupy all the nodes if there are too few chunks. If data associated with a chunk is too large to fit into memory, the Dask scheduler will spill intermediate data products to disk.

Neither CASA nor the prototype achieves a linear speedup due to scheduler overhead, disk io, internode communication, etc. The most computationally expensive step is the gridding of the convolved visibilities onto the uv grid: 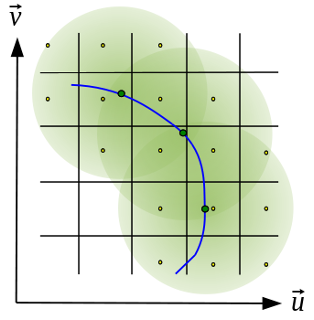 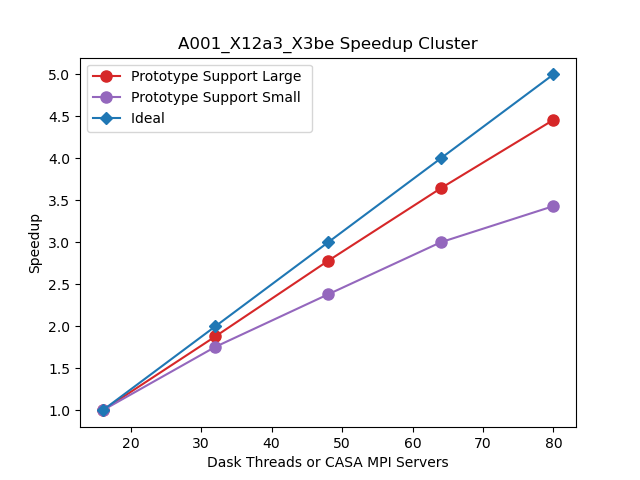 The CHILES experiment is an HI large extragalactic survey with over 1000 hours of observing time on the VLA. We choose a subset of the survey data:

The CHILES dataset has a data volume over 8 times that of the largest ALMA dataset we benchmarked. For an 8 node (128 cores) run, the following results were achieved:

The poor performance of the prototype for 256 chunks is due to the chunks being to large and intermittent data products spilling to disk. This can be seen in the Dask dashboard below (the gray bar shows the data spilled to disk): 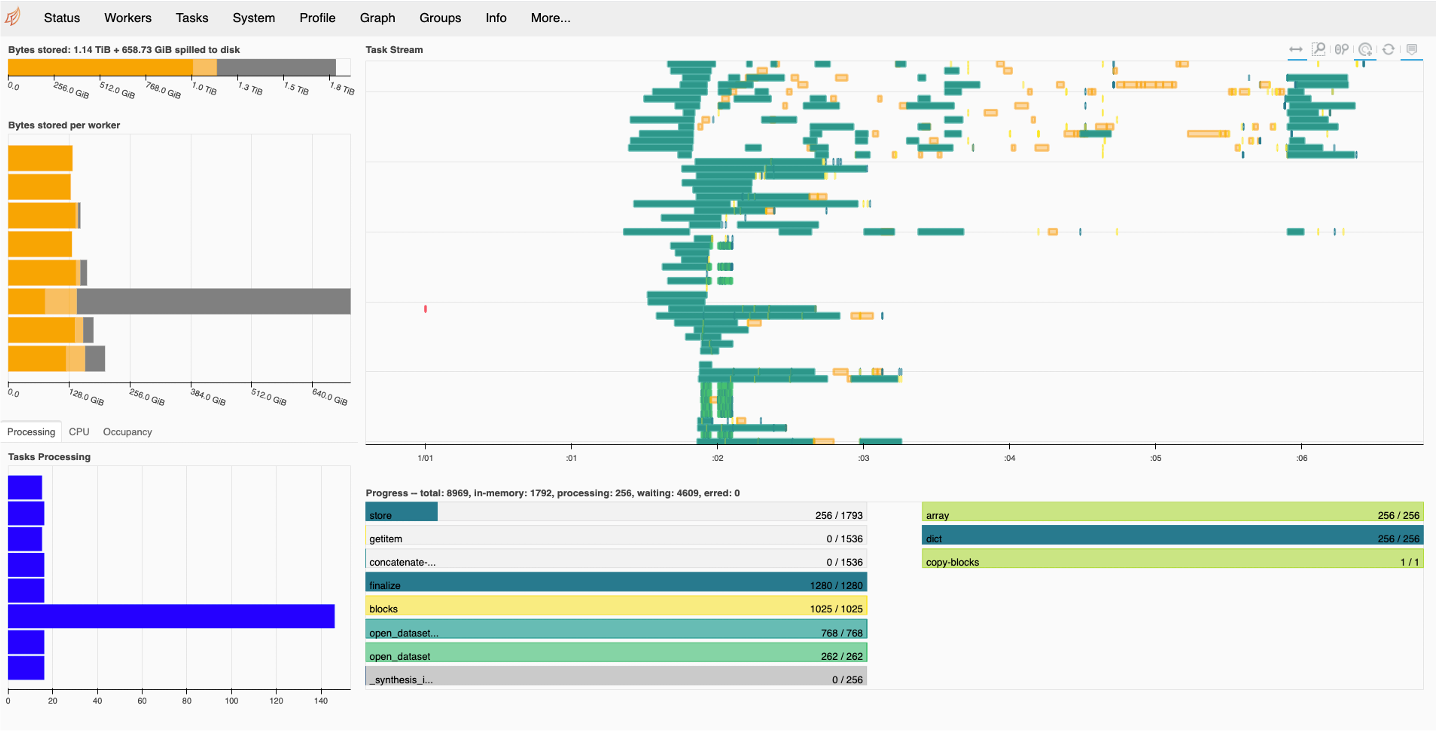 When the number of chunks is increased to 3840, no spilling to disk occurs and the Dask dashboard look like: 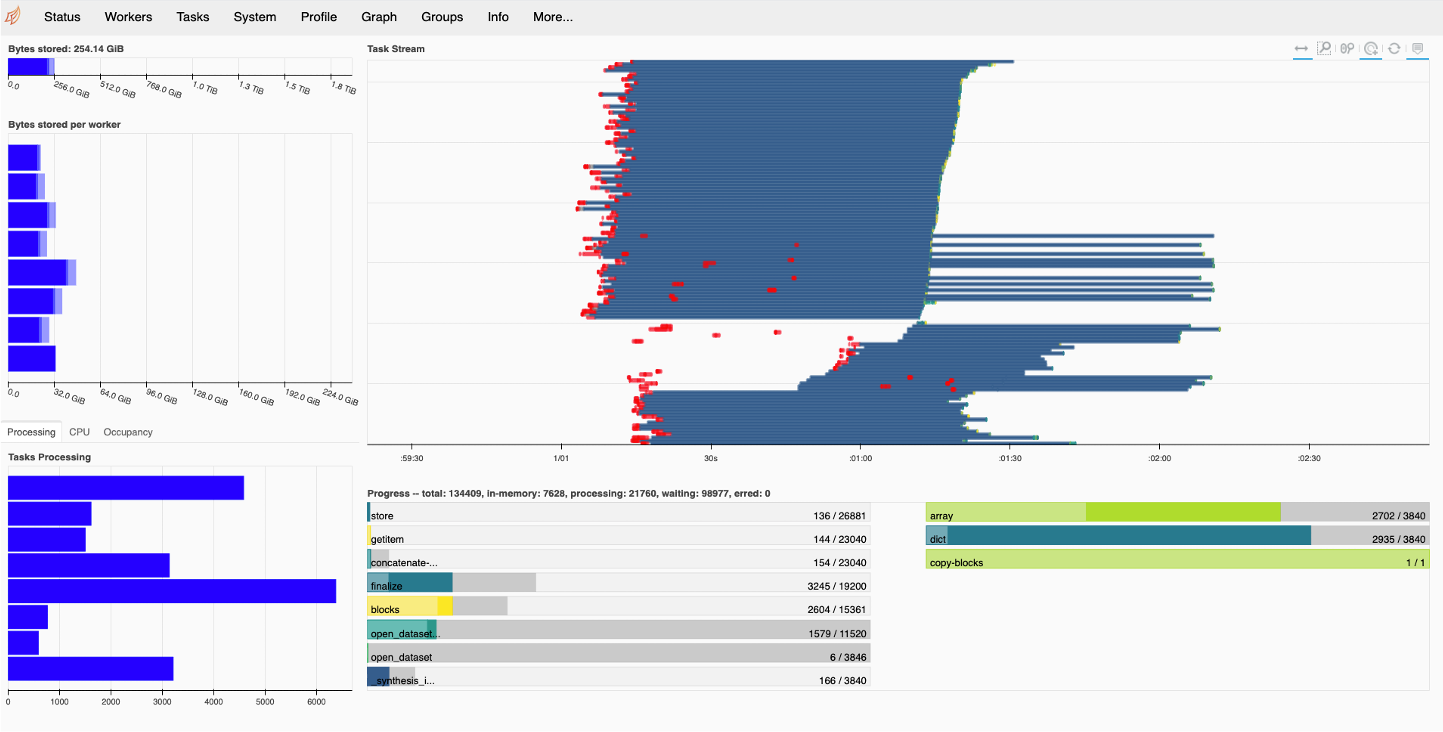 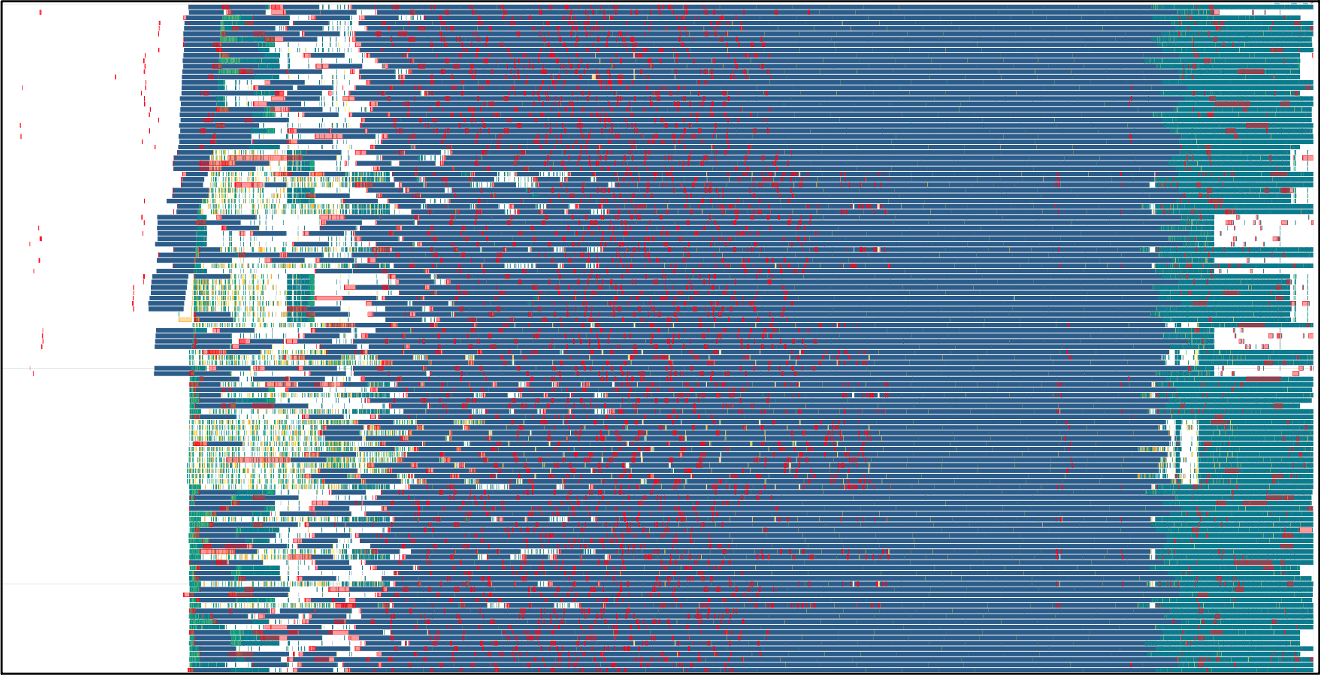 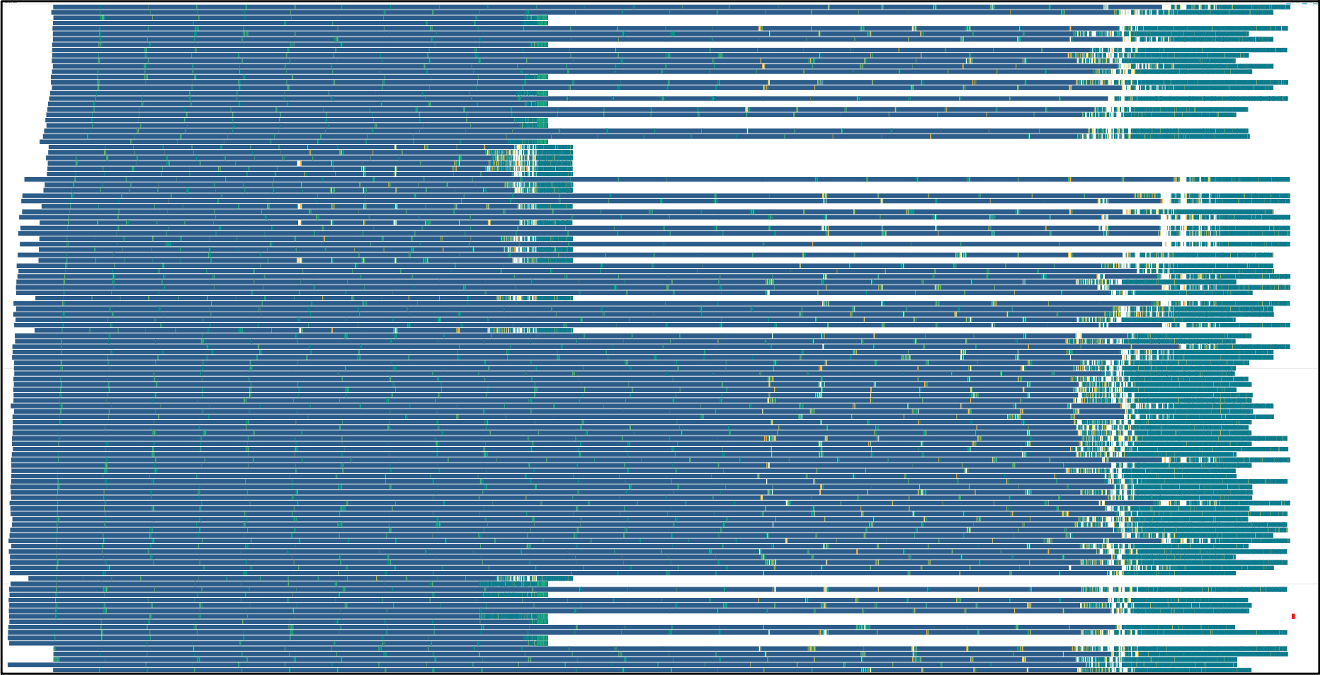 The total runtime curves for tests run on AWS show higher variance. One contributing factor that likely dominated this effect was the use of preemptible instances underlying the compute nodes running the worker configuration. For this same reason, some cloud-based test runs show decreased performance with increased scale. This is due to the preemption of nodes and associated redeployment by kubernetes, which sometimes constituted a large fraction of the total test runtime, as demonstrated by the task stream for the following test case. Note the horizontal white bar (signifying to tasks executed) shortly after graph execution begins, as well as some final tasks being assigned to a new node that came online after a few minutes (represented by the new “bar” of 8 rows at top right) in the following figure: 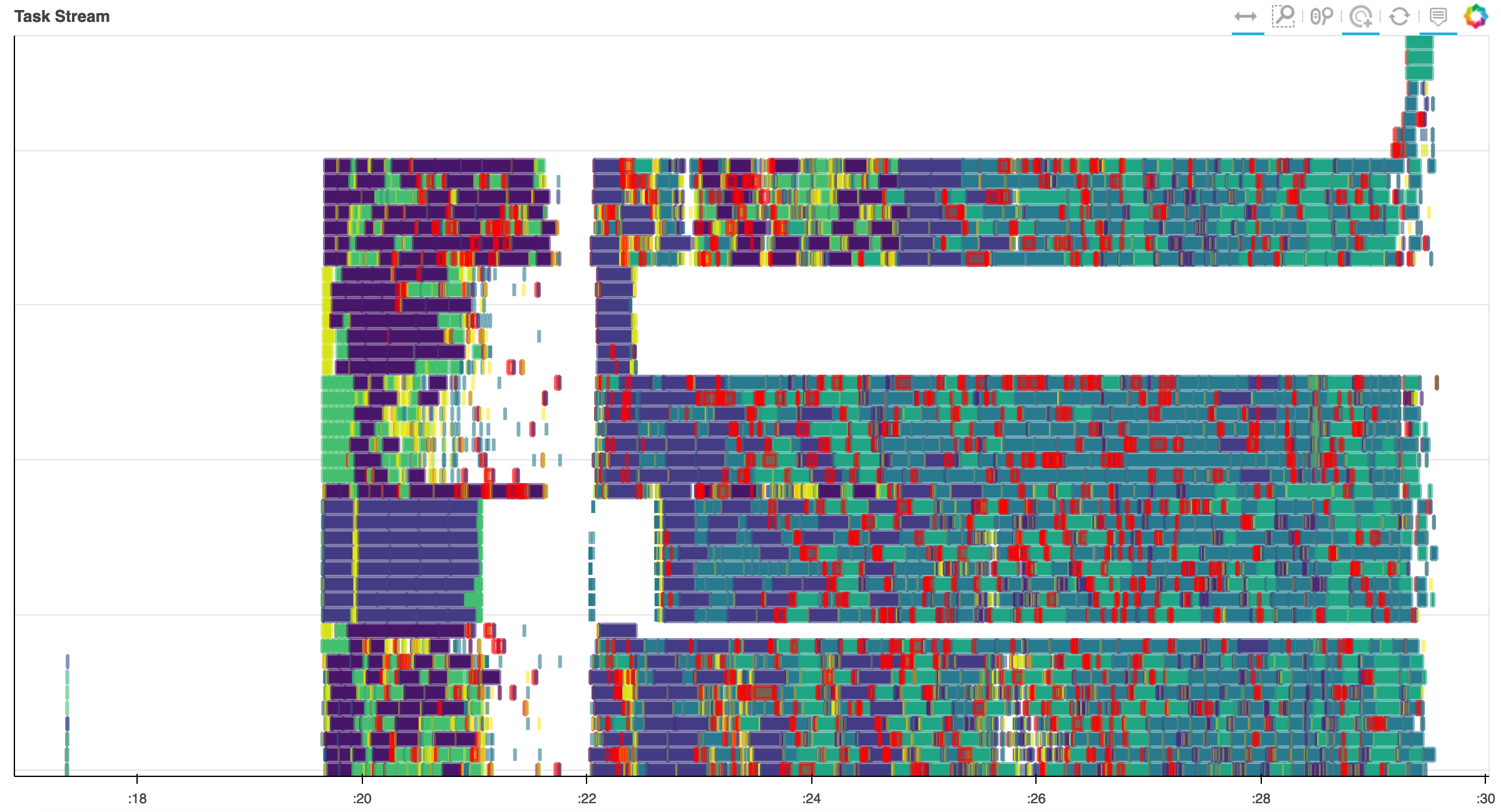 Qualitatively, failure rates were higher during tests of CASA on local HPC infrastructure than they were using dask on the cluster or cloud. The cube refactor shows a noticeable improvement in this area, but still worse than the prototype.

Benchmarks performed using a single chunk size constitute a test of strong scaling (constant data volume, changing number of processors). Three of the projects used the mosaic gridder, the test of which consisted of multiple function calls composed into a rudimentary “pipeline”. The other project used the standard gridder, with fewer separate function calls and thus relatively more time spent on compute.

The communication of data between workers constituted a relatively small proportion of the total runtime, and the distribution of data between workers was relatively uniform, at all horizontal scalings, with some hot spots beginning to present once tens of nodes were involved. This is demonstrated by the following figure, taken from the performance report of a representative test execution:

The time overhead associated with graph creation and task scheduling (approximately 100 ms per task for dask) grew as more nodes were introduced until eventually coming to represent a fraction of total execution time comparable to the computation itself, especially in the test cases with smaller data.

Dask profiling data were collected using the `performance_report <https://distributed.dask.org/en/latest/diagnosing-performance.html#performance-reports>`__ function in tests run both on-premises and in the commercial cloud.

Some values of the distributed configuration were modified from their defaults:

Hyperthreads exposed as vCPUs on the EC2 instances were disabled using the following shell script at instance launch: